"...what a person accomplishes in life is directly correlated with the people around them." - John Berardi 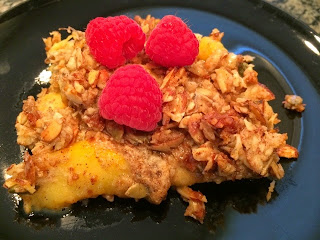 I get so excited this time of year when the peaches are ripe! I found a farm not too far from us about a week ago and asked if they had any boxes of peach seconds (the ones that fell on the ground but are usually still perfectly great to use). If you don't have your own fruit trees, this is a much cheaper way to get a bunch to eat fresh and also freeze to enjoy during the winter months. You'll never buy peaches from a grocery store again after tasting the goodness of the real deal from a local farm or orchard!

In looking for a peach recipe to try, I wanted to have something a little different for breakfast and this is the recipe I found on the Primally Inspired blog. It was sooooo ridiculously delicious and tasted like we were having dessert for breakfast. Kind of dangerous around here... :) I had some left over coconut milk whipped cream in the fridge, so I threw a dollop on top as well! I will definitely be adding this one to our list of favorites and "mixing things up list" from our typical breakfasts! Kid approval, guaranteed! 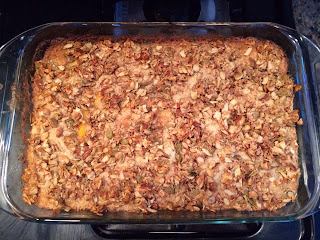 Directions
1. Preheat oven to 350 degrees F.
2. Place coconut oil and peaches in a 9x13 baking dish.
3. Whip just the egg whites until peaks form with a stand mixer (or hand mixer).
4. While the whites are whipping, mix together the yolks, maple syrup, cinnamon and vanilla.
5. Once peaks form for the egg whites, fold in the yolk mixture.
6. Mix just until incorporated. Do not overmix at this point (approx. 5 seconds with a stand mixer)
7. Place the egg mixture all over the peaches.
8 Bake for 15 minutes.
9. While it's baking, mix all the topping ingredients together.
10. After 15 minutes is up, gently place the topping all over the eggs.
11. Bake for an additional 15 minutes or until thoroughly cooked through.
Posted by Bethany Crawford at 7:08 PM

Bethany Crawford
Hi, I'm Bethany! I am a wife, mother, health foodie and I have a daily mission: Optimizing Me. I hope that's why you're here too. Whether it's working on your physical, mental, emotional, or spiritual improvement, I believe it's the positive daily habits we form that make a life worth living. I want to share some of the things I've learned and the new things I'm trying to become the optimal me. I hope you'll join me in this life-long journey and join the community for a lot of great ideas and fun!

Buy Reusable Produce & Bulk Bags - Made with Love for the Planet!